The Biggest Attraction of China

The biggest attraction of China is … me!

At least while I’m here and moving around. Wherever I go (outside of the main tourist destinations), I instantly become the center of attention. Being a strange looking long-nosed, huge-eyed, hairy-cheeked alien, mumbling funny-sounding undecipherable syllables and making weird facial expressions while simultaneously moving my hands like a clown trying to communicate a simple idea or need, I become a magnet for adults and children alike.

When, for example, I am in a remote town that never sees any foreigners and I stop to ask a local something, within seconds I attract a huge gathering around me: curious Chinese, who offer to assist in trying to decipher my needs. Oftentimes, the ten or more who gather around split into groups of three or four, and then each group begins to analyse and seriously theorize on the meaning of my strange sounds and expressions. I feel they get a double pleasure: on the one hand, by trying to help a traveler in need, and on the other by attempting to solve the challenging puzzle of figuring out my needs. When finally the “smartest” breaks my facial-mumbling-sign-language code, he gets cheers of admiration from the rest and feels very proud ­– not least because the alien congratulates him with a tap on the shoulder and the wave of a clutched fist to signify strength and success. This “smartest” one, who is usually the most educated or the most traveled or the one who simply knows a few English words, instantly gains the privilege of becoming the liaison between his species and mine. If two happen to break the code at the same time, then both claim the title of liaison, and neither backs down to let the other take the trophy. So I end up with two helpers for a while.

At many attractions throughout the country, where the overwhelming majority are Chinese visitors, I stand out amidst the crowds, and many ask me to pose with them in their photos. I even get the feeling they are more interested in me rather than the attraction in front of which we stand! So now my face is to be found in hundreds, if not thousands, of family albums around China, right there in the centre, in front of the Kunming Stone Forest, or the Guilin karsts, or  the Giant Buddha of Leshan – there’s the family at the giant toe, and in the middle … the Greek guy. I do not even want to imagine the possibility that my face may be held with magnets on many refrigerator doors!

Something else that happens quite often, and which is more subtle and enjoyable than instant stardom, is when I am having a new cultural experience, such as eating a regional delicacy or watching a traditional Chinese music performance under the gaze of the locals. I delightfully observe their mysterious pleasure at seeing me enjoy for the first time what they themselves regularly enjoy. Their curious stares try to figure out if I like the new taste or if I can discern the same beauty in their music that they do. It is almost as if, in a strange sense, they are vicariously re-experiencing their familiar world through the foreigner’s eyes! Through my fresh enthusiasm and wonder, they come to re-appreciate and reaffirm their love of their everyday world. What was ordinary and pedestrian to them a few minutes earlier suddenly becomes extraordinary and beautiful again. The foreigner infuses their world with a new vitality. I oftentimes see, in their joy and laughter as they observe me, the child they left behind decades ago.

I recall my full immersion in a very unique local experience at a public park in Chengdu: I had my ears cleaned and their inside … massaged by the itinerant Ear-Masseur. Not only did I have a supreme one-of-a-kind bodily sensation, best described by the term “ear-ecstasy,” but while I experienced it, I was surrounded by locals sitting at nearby tables whose broad smiles showed me that they knew “I got it.” I felt that my sighs of delight became the seal of approval, or rather the vindication, of their weird custom. And that my new delightful auditory-canal experiences served as the crossing to the other side, where I met the Chinese world through the universal language of bodily sensations we all share.

True, in many underdeveloped parts of the world where people rarely, if ever, see foreigners (such as in Papua New Guinea or the Solomon Islands), I was instantly turned into a wandering celebrity, a VIP. In some cases, I even had a whole village waiting for me at the banks of the river as I arrived, my fame having moved faster than my body! Yet, in no other developed country have I ever felt as special, a real moving attraction, as I do now in China. 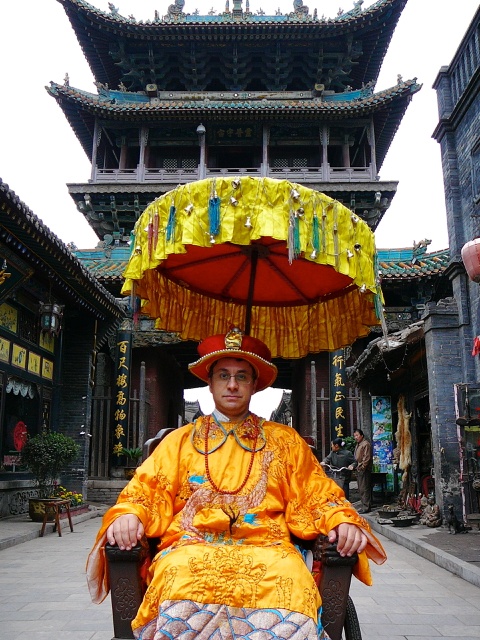 The Future Emperor of China.