Enough with the settled life!

There is no settled life – do not fool yourselves.

Restlessness is the default state of Man.

When I was younger, I used to divide people into two categories: the settled and the restless. I put myself in the second category, and hated my self-categorization. Deep down, I did not like my restlessness. I saw what seemed to be the peace and calm of others, and I wished I would be like them. I was surrounded by so many who were settled: those who gave the impression that they had found the answers to life’s big questions, or who had concluded that these answers couldn’t be found, or who were tired of seeking and ended up content to simply lead a life dealing with everyday concerns.

In contrast, the more questions I seemed to be answering, the more questions kept appearing. And, unlike the heads of the Lernaean Hydra, I could not even use Hercules’s torch to burn them. I was being devoured, consumed alive by the archetypal internal beast of multi-headed restlessness at the center of my soul.

But recently I have revised my ideas. I have wondered for decades: Are the settled truly settled? Or is there a deep unsettledness in them? My naive dualism h 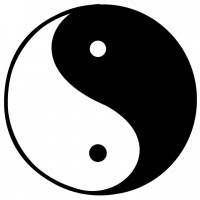 as now been replaced by a “Vedantic monism”: Well, the settled are not actually settled! They are as unsettled as the restless. Just as the little black dot in the center of the white figure in the symbol of the yin and yang, the seed of restlessness lurks within the presumably settled.

So what happens to the old dichotomy? Are there truly no settled and restless? Am I, the restless, the same as that person opposite who seems to have dealt with all the big problems of life that torment my soul? Well, we are not the same. But our difference is not as I used to believe. We are both restless, but we deal with our restlessness in different ways: The “settled” put their restlessness “under the mattress,” so to speak, while the restless confront it head on. True, many settled are unconscious of their restlessness, but others are not. It is rather a choice; they choose not to bring it to the forefront of their lives, not to make it the central issue of their daily concerns. So they cover it with other things that appear to be more important, or they pretend that those other things are imposed upon them from outside forces over which they have no control. Yet, the restlesssness persists in the background.

If you think you are settled, think again! The easier it has been for you to achieve your supposed state of rest, and the more you repeat to yourself that you have settled, the more you unconsciously struggle to hide from your view that little black dot of restlessness in the midst of it all. There is no permanent settledness in settledness. For humans are the permanently incomplete species, and therefore permanently restless. At the heart of restlessness is none other than the fact that we are born incomplete and need to work for our completeness throughout our lives.

Ever since Heraclitus defined the nature of the visible world with three words “ta panta rei” (“everything is in motion” or “everything flows”), science has continually confirmed this truism. Rest is not a real “state of being” in the universe of which we are a part. Everything we consider as being at rest, or quiet, or even empty, is actually teeming with activity. An atom at rest is one around which electrons incessantly rotate, and the proton, once thought of as stationary, is actually a multiplex of many particles, exchanging energies in restless activity. Even the emptiness of space is replete with radiation, particles, and many other objects that scientists cannot stop discovering. Just as the physical universe is permeated by an infinite restlessness, so are the plant and animal kingdoms. Nothing is more relevant to our discussion than the apparently passive and restful seed that begins to stir and break open the moment it is planted and watered. The seed’s “restlessness” is none other than the seed’s creative energy, the force that will guide it through its many metamorphoses so that it may become the bush or the tree. But if one could rate or calibrate all the various forms of restlessness in our universe, none would surpass the creative restlessness in man, a restlessness that molds, transforms, and modifies matter and energy, creating objects from the  mind and imagination. This inner restlessness of the human soul, which is none other than the seed of incompleteness at the center of man’s psyche, cannot be extinguished. Every seemingly settled state is but a small interval on the path of a never-ending ascending restlessness that seeks, discovers, moves forth, and grows. Behind all human evolution, all human creations and achievements, everything we admire and strive to emulate, every great work of art, music, literature, philosophy, and science, every transformative collective struggle, be it revolution, war, or a social movement, is the restlessness of Man.

The settledness that is the result of a life that has not faced its deep questions and passions, its tsunamis and fiery volcanoes, is not a true state of rest or peace. It is artificial. You cannot skip restlessness to find peace! True peace and settledness are none other than the reward of a restlessness responsibly faced. Calm and peace do not come about by searching for peace for peace’s sake; nor by chanting “Om” all day long, nor shrinking back from the difficult external and internal challenges that Life presents us with. Achilles’s triumph comes on his deathbed, and Odysseus’s peace comes after a lifetime of trials. Socrates’s master teaching, the “Phaedo,” is given at the very end of a life during which he heeds his restless “daimonion.” The Buddha achieves his nirvana once he foregoes the settled life of his father’s palace and ventures into the struggling world; Jesus’s resurrection comes only after his crucifixion; Arjuna’s gloom is lifted once he faces his restlessness and enters the battle. Beethoven’s “9th Symphony” is created after he loses his hearing; Picasso’s “Guernica” is inspired by a horrific war. To paraphrase Victor Frankl’s idea, which he uses in another context, “settledness cannot be pursued, it can only ensue.”

Restlessness is the beginning, middle, and end of peace: the way to it. Those who avoid facing the inner restlessness, those who fear change, those who move and act within the familiar and the comfortable, betray the essence within Man. The modern obsession with relaxation and fighting stress is completely misplaced. Granted, there are unhealthy and negative stressors due to our modern lifestyle, which may be termed the “surface stress” of life, and which may be dealt with by some of these methods. But the default stress, the existential stress that lies at the core of our being and makes us seek completeness and self-fulfillment, the struggle to become what we are meant to become, is not only healthy and necessary, but must be consciously acknowledged. The restless know this and harmonize their movements with this natural flow of things. That’s why I sometimes feel that, paradoxically, the restless end up being more truly settled than the seemingly settled!

If you count yourself among the settled, it’s time to stir things up. You are, whether you like it or not, a member of the restless tribe. Accepting, embracing, facing, and dealing with our inner restlessness is none other than an affirmation of our innermost nature as incomplete human beings. The moment we think we are self-fulfilled or done with our struggles, Life unbalances us once again by toppling our newly discovered apparent settledness. Verily, only with Death does true rest finally arrive.

This is my “Hymn to Restlessness.”

Hail to the Restless Tribe!